Select a location to call.

How Much Sleep Do Kids Really Need?

For some parents, the battle to get kids into bed is as much a part of their nightly ritual as brushing teeth and putting pajamas on. But, how much sleep do children really need? Experts say that healthy child development requires sufficient sleep. So when a young child fails to fall asleep at an appropriate hour, both parents and child suffer. If the sleep deficit becomes too great, it causes sleepiness and can negatively affect performance, concentration, reaction time, memory, mood, and behavior control. A child’s physical growth can even be affected by a chronic lack of sleep, since growth hormones are most active during sleep. The National Sleep Foundation recommends this amount of sleep for each age group: 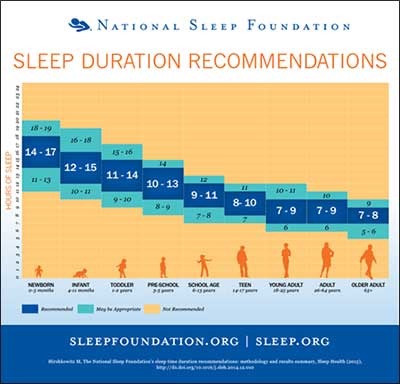 Make Use of Transitional Time

In many households, both parents work, so the whole family rises early. This makes a firm bedtime more important than ever. Unfortunately, many parents find that getting their young child to bed is the most difficult part of the day. To overcome this, create a routine associated with bedtime. Be as consistent as possible and start the routine at the same time every night.

One useful technique is the effective use of transitional time, which falls between normal evening activities and bedtime. Quiet, low-key activities like bedtime stories, prayers, singing, warm baths, cuddling, and quiet talk make for good transitional time. Many children have a favorite teddy bear or toy they associate with bedtime. Once you establish this routine, your child will make the connection between quiet time and bedtime. During the transition, avoid activities that stimulate your child like wrestling, roughhousing, or exciting television shows.

In addition, make sure your child gets at least 60 minutes of physical activity during the day. Activity reduces stress, and induces fatigue and relaxation. Your child may even look forward to going to sleep at night.

Do Not Be a Sleep Assistant

The amount of sleep a child needs can vary depending on the child. It is up to parents to judge the exact amount of rest their children need. On average, kids aged 6 to 13 years old need about 9 to 11 hours of sleep each night. The earlier you establish a routine, the better. In fact, you can start bedtime routines during infancy.

Try to avoid staying with your child until they fall asleep. It can lead to a habit that is hard to break because your child will expect it to continue. Further, it may inhibit their ability to fall asleep when they are alone. Instead, think of yourself as a helper to set the mood for a good night's sleep. The transition will be difficult, but there are ways to ease your child into a new routine. Remember to give it time and remain patient.

The American Academy of Pediatrics recommends waiting several minutes when your child calls out from their bed. The idea is to give children a chance to fall asleep on their own in between call outs. If the next call comes, stop farther from the child's door every time you approach the room. If you can, avoid going into the room. If you have to go in, do not turn on any lights, or engage in conversations or play. Every time you are called, remind your child that it is time to go to sleep.

Sleeping problems are common. If you think your child may have a sleep problem, try keeping a sleep diary. Record bedtimes, awake times, reasons for getting up at night, how long your child remains awake, and what it took to get them back to sleep. You may see a pattern develop that can help you talk out your child's problems and give reassurance. It may also be useful to record changes or stressful events in their daily life.

The journal also may help reveal sleep disorders such as sleep apnea, night terrors, nightmares, or sleepwalking. Writing down specific incidences is helpful for you and your child's doctor. Although night terrors tend to resolve on their own, sleep apnea requires treatment. In most cases, having an established routine each night is the key to helping your child get to sleep at night on their own. If problems persist, consider talking to your child's doctor for advice.

Too little sleep for any child—even one hour less a night—easily develops into a sleep debt that is only wiped out when enough sleep is obtained. This is especially true for teenagers, who often switch back and forth from late hours on weekends to early hours on weekdays. Sleeping late on the weekends may help with some of the sleep deficit, but can exacerbate the overall problem of chronic sleep deprivation.

Teens need 8-10 hours of sleep per night, yet on average get around 7 hours. Not getting enough sleep is only part of the problem, as sleep patterns also change during adolescence. Changes related to puberty cause the sleep hormone melatonin to be released later in the day, which alters circadian rhythms and, in turn, the sleep-wake cycle. The result is that teens fall asleep later and wake up later. While this altered schedule is recognized as a normal part of puberty, it has not changed the fact that many middle and high schools have early start times, cutting into possible sleep time.

While observational studies do not allow researchers to say for sure whether poor sleep quality is a cause or a result of depression and low self esteem, other sleep researchers have linked a lack of sleep in young children to a whole host of daytime woes. These include hyperactivity, behavior problems, learning difficulties, and that dreaded condition feared by all parents: the cranky child. Childhood sleep disturbances and behavior disorders can be associated with the following:

One of the most troubling effects of sleep deprivation is a drop in memory and attention, making learning more difficult and negatively impacting school performance. In one study, researchers found that struggling students went to bed 40 minutes later and had 25 fewer minutes of sleep than students earning better grades. The students who got less sleep also experienced increased sleepiness during the day, depressed mood, and behavior problems. Even this small difference in sleep seems to affect the way children function during the daytime.

Depression and Other Disorders

Too little sleep also can contribute to a negative self-image and depression. A study in the journal Sleep Medicine looked at the rate of depression among those with various sleep disorders. The results showed a higher rate of depression than the general population, with over half of the 917 study participants found to have some form of depression. The researchers recommended that sleep-deprived people should routinely be evaluated for depression.

The National Highway Traffic Safety Administration attributes 100,000 crashes annually to drowsy drivers. Sleepiness and driving are a lethal combination because of slower reaction times, decreased attention, and a slower rate of information processing. Young drivers, especially those 16-29 years old, are among the highest at risk for drowsy driving. In fact, some studies have shown that driving with no sleep can be equated to driving under the influence.

Getting enough sleep is more than a good idea. It restores us both physically and mentally. If your child is irritable, has difficulty waking, or falls asleep spontaneously, sleep deprivation may be the culprit. Try the following steps to create a balance between sleep and a busy calendar:

Lastly, one of the most impactful ways to establish good sleeping habits in children is to be a good role model and establish them for yourself!

If you are looking for guidance on getting your kids to sleep and other questions regarding children, Heather Bragg, NP, is available to help. Call the office at (540) 382-6148 or book with Heather online. She is currently welcoming new patients.