Select a location to call.

Life Expectancy May Depend on Where you Live

The Journal of American Medicine (JAMA) reports that how long you live may depend on where you live. In a recent study by the University of Washington's Institute for Health Metrics and Evaluation (IHME), researchers found that life expectancy is largely determined by a combination of differences in socioeconomics, race and ethnicity, behavior, and healthcare factors. The study analyzed over 3,000 counties throughout the United States between 1980 and 2014. Overall, life expectancy in the United States increased for men and women a combined 5.3 years, from 73.8 years to 79.1 years. In several counties, though, longevity was up to 20 years lower.

In fact, the gap in life expectancy in some places increased during this time and continues to be on the rise. Oglala Lakota County, South Dakota, which includes the Pine Ridge Native American reservation, had the lowest life expectancy in 2014, at just under 67 years. This is comparable to countries like Sudan (67.2 years), India (66.9 years) and Iraq (67.7 years). In addition, some counties in Kentucky, West Virginia, and Alabama, as well as several states along the Mississippi River, had a lower life expectancy.

On the other hand, many counties in Colorado revealed the highest life expectancies, with Summit County, Colorado, leading the nation at just under 87 years. That's better than the principality of Andorra, a tiny country wedged between France and Spain that has the world's longest life expectancy at 84.8 years. "Looking at life expectancy on a national level masks the massive differences that exist at the local level, especially in a country as diverse as the United States," lead author Laura Dwyer-Lindgren said in a statement.

The impact from the study could come at the federal, state, and local levels officials to promote programs that encourage healthy behaviors and disease prevention in communities with a lower life expectancy. "The inequality in health in the United States – a country that spends more on health care than any other – is unacceptable," said Dr. Christopher Murray, director of IHME. "Every American, regardless of where they live or their background, deserves to live a long and healthy life. If we allow trends to continue as they are, the gap will only widen between counties." 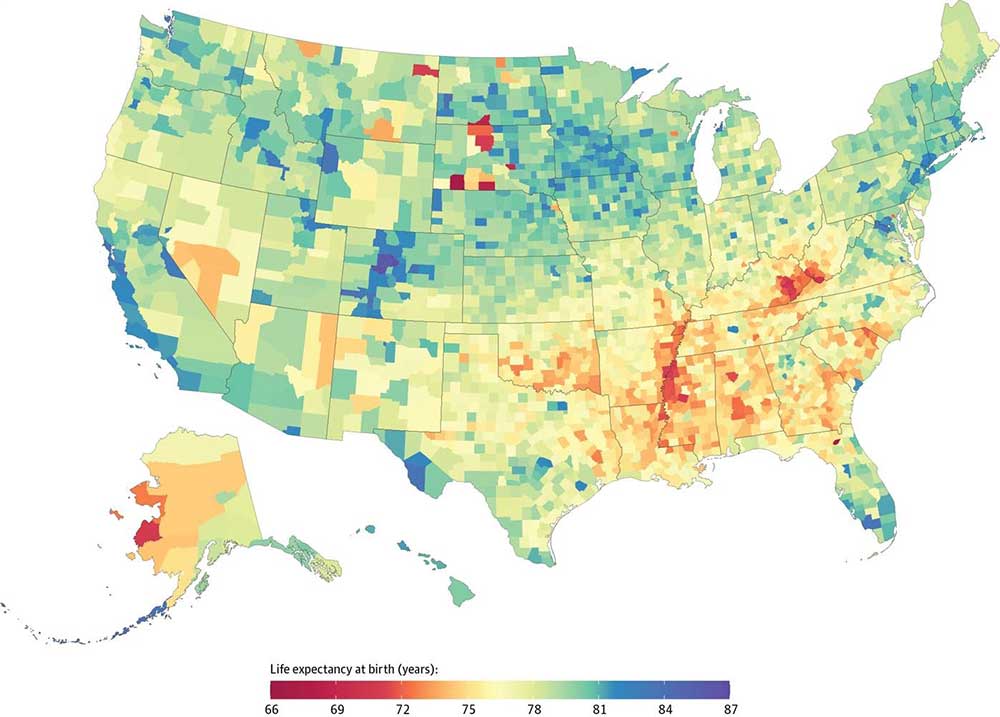 Despite differences by locality, as a whole people are living longer than ever, although men still trail women in life expectancy, cites a recent study published in Proceedings of the National Academy of Sciences. An international team of researchers reviewed data from more than 1 million people worldwide. From the 18th century to the present, they found that the last few generations have had the largest life expectancy increase in the history of humans and all other primates.

For example, life expectancy in Sweden over the last 200 years increased from the mid-30s to over 80. "We've made a bigger journey in lengthening our lifespan over the last few hundred years than we did over millions of years of evolutionary history," said study co-author Susan Alberts, a biology professor at Duke University in Durham, N.C.

But despite the overall increasing life expectancy –the result of advances in medicine and public health – men still tend to have shorter lives than females, something that is true in other primates as well. "The male disadvantage has deep evolutionary roots,” Alberts said. "It's puzzling. If we can make life last so long, why can't we shrink the male-female gap?" Possible reasons include genetics and higher levels of risky behaviors in men, the researchers suggested.

Guidelines for Living a Longer Life

Health risk factors appear to play the largest role in a county's life expectancy, with 74 percent of the difference explained by things like physical activity, diabetes, blood pressure, smoking and obesity, “according to lead researcher Ali Mokdad, a professor of global health IHME. Healthy living appears to have more of an impact on longevity than access to healthcare. Bike share programs, park improvements, community gardens and farmers' markets are all steps that localities can take to improve the health of its residents. While socioeconomics, race, and genetics all play a role, there are some behaviors that can increase your longevity: